Above the Influence [ATI]-Kent County™ celebrates the choices Kent County youth make daily to live above the negative influences around them. Through the advancement of Above the Influence-Kent County™, the Kent County Prevention Coalition [KCPC] creates spaces for even the most vulnerable to use their voice to make a difference.   ATI- Kent County™ is designed to equip teens to think critically about personal choices and future ambitions related to underage substance use and misuse, and the power community teens have individually and collectively to impact peers, family and community norms and the world by making a personal commitment to live Above the Influence.

ATI-Kent County informs and inspires teens to reject illicit drugs via TV, print, Internet, and local radio advertising.  Most importantly, in partnership with schools, community organizations, and faith communities. Above the influence is about:

Above the Influence-Kent County Youth Coalition 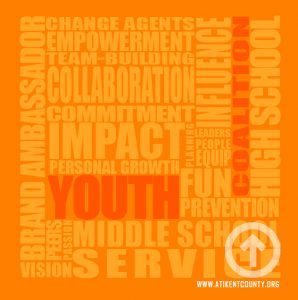 Each fall the enrollment opens for student involvement with the Above the Influence-Kent County Youth Coalition.

The ATI-Kent County Youth Coalition grooms 6-12th graders for GREATNESS by educating, equipping and empowering them to be become the face of substance use prevention efforts here in Kent County.  By working as a team to plan the annual ATI-Kent County Youth Summit by learning from various community stakeholders on matters of prevention and through participation in various community activities, members of the Youth Coalition will learn to flex their individual leadership muscles!

With so many influences out there, it’s important to GET THE FACTS.

FACT IS: while you’re a teen (and even into your early 20’s!), you’re still growing and developing, and drug abuse during these years in particular can have a lasting impact. ANOTHER FACT to consider: the brain is much more vulnerable to addiction during these years. 90% of Americans with a substance abuse problem started smoking, drinking or using other drugs before age 18.

When it comes to drug use, individual reactions and experiences vary, so it’s important to understand the usual risks and effects, both short- and long-term. Knowledge can be the key to making your own best decisions.

GET THE FACTS: ALCOHOL

ALCOHOL is a depressant derived from the fermentation of natural sugars in fruits, vegetables and grains. These are brewed and distilled into a wide range of beverages with various alcohol contents.

THE RISKS:  In small doses, some of the short-term effects of alcohol are reduced tension and relaxation, but these are also accompanied by reduced inhibition (your ability to stop yourself from doing something you know you shouldn’t), coordination and reaction time – all of which put you at risk.

When you drink a lot and drink fast (binge drinking), the risks go up even faster. In addition to the serious danger of alcohol poisoning, the depressant effects of alcohol can overwhelm your body’s defenses. Unable to move and think clearly, you can do risky and reckless things that are unsafe, or even lethal.

Each year, approximately 5,000 people under the age of 21 die as a result of underage drinking. This includes about 1,900 deaths from car accidents, 1,600 homicides, 300 suicides, and hundreds of other deaths due to accidents like falls, burns and drownings.

THE BOTTOM LINE:  Yes, it’s legal for people 21 and older. One reason is that alcohol can have seriously dangerous, long-term impacts on a body and brain that are still developing. Also, statistics show that more teens are killed by alcohol than by all illegal drugs combined.

GET THE FACTS: MARIJUANA

MARIJUANA is at the center of a lot of debate, and there’s often exaggerated and even false claims made by those on each of the opposing sides. What matters is understanding how it can impact you as a teen, and that information can be hard to find in the middle of so much hype. Laws are changing, and there’s potential for new medical treatments, but these don’t erase the risks.

WHAT IS IT?  A green and brown mix of dried flowers, stems, seeds and leaves from the hemp plant Cannabis sativa.1 The main active chemical is THC (tetrahydrocannabinol), which moves quickly through the bloodstream to the brain and other organs throughout the body.

THE RISKS: THC acts on specific targets in the brain, called cannabinoid receptors. Ordinarily, these receptors are activated by brain chemicals similar to THC that are part of a neural communication system, and play an important role in brain development and function. Marijuana over activates this system, causing impaired coordination, difficulty with thinking and problem solving, and disrupted learning and memory.

Anything that impairs coordination and judgment, which marijuana does, increases a driver’s risk of being in an accident. And when used in conjunction with alcohol, the combined result is worse than either substance alone.

Your brain goes through significant development during your teen and young adult years, and marijuana’s effects on the developing brain create risks unique to that time period. Following marijuana use, a teen’s decrease in cognitive abilities can last much longer than an adult’s, as long as several weeks since last use. With regular use (daily or nearly daily), the alterations to the brain caused by marijuana become prolonged by frequent recurrences, which can in-turn lead to lowered learning capabilities, a shortened attention span, and weakened verbal communication skills.

There is also an association between regular and prolonged marijuana use and mental illness. A link has been demonstrated with later development of psychosis, and rates increase for those who start young. Associations have also been found with other mental health problems such as depression, anxiety, and suicidal thoughts among adolescents.1 It’s important to note that the nature of these links is still unclear. More research is needed to better understand whether there is only correlation, or whether causality may exist as well.

THE BOTTOM LINE:  Marijuana has the potential to cause problems in your daily life, or make existing problems worse. It limits your brain’s effectiveness, slows down thinking, and impairs coordination and judgment. And while you’re young and still maturing, marijuana could have a long-lasting, negative impact on your developing brain.

211 is Kent County’s directory for resources.